Several years ago, I found the audiobook Submerged on my library’s website. I’d never heard of the author before, but it ticked all the right boxes: Christian, suspense, family, exciting location, and intriguing story. I LOVED that book. I bought a copy for my Kindle, and I’ve read it several times. And listened to it again, too.  As each new book in the series was released, I bought the digital book and borrowed the audio from the library.  Later, Ms. Pettrey wrote a prequel novella, and I got that one, too.  The Alaskan Courage Series is s till one of my very favorite series.  She next wrote the Chesapeake Valor series, and I enjoyed those, too.

So when Celebrate Lit announced openings for The Killing Tide blog tour, I signed up immediately.  By then, I’d already listened to the book, and I knew what I wanted to say about it!

Dani Pettrey writes tightly-plotted, complex stories. They are always interesting, with surprises and plot twists that feel plausible.  Because The Killing Tide  is the first book in a new series (Coastal Guardians), there was a lot of information  and many characters to introduce.  It was just a little confusing at the start, but it straightened out quickly.  It’s fun to start the first book in a new series, knowing that you will be with that cast of characters for several books and each of them will get their own story.

The hero of The Killing Tide, Coast Guard Investigative Service special agent Finn Walker, is a solid, charming character. He’s steady.  The heroine… not so much.  If we’re going to have a character grow and change over the course of the story,  she has to start out flawed. I get that.  Gabby does improve, Her spiritual growth and personal change are handled beautifully.  But I just didn’t like Gabby.  An ambitious reporter, her willful and reckless behavior put other people in danger and upset her family. She even exploited a new widow, dragging her along into danger,  just to get her news story.  By the time she had her “epiphany,” I’d lost interest in her and was wondering why Finn didn’t find himself a nicer girl.

That doesn’t mean I didn’t like the book. I DO like the book.  The setting and Coast Guard situation were interesting. The plot was great.  I look forward to reading all the other books in the series.  As usual, I will probably listen to them on audio. The narrator, Nina Alvamar, handled male and female voices nicely. Her reading was smooth and pleasant, neither dull nor overly dramatic.

My favorite thing about Dani Pettrey’s writing is that she’s not afraid to write books with real Christian characters. They talk, think, and act like real Christians. They interact with other Christians and non-believers in a realistic way.  She’s not preaching; she’s portraying life.  I love that.

When one Coast Guard officer is found dead and another goes missing, Coast Guard Investigative Service special agent Finn Walker faces his most dangerous crime yet. His only clues are what little evidence remains aboard the dead officer’s boat, and the direction the clues point to will test Finn and the Guard to their limits.

When investigative reporter–and Finn’s boss’s sister–Gabby Rowley arrives, her unrelenting questions complicate an already volatile situation. Now that she’s back, the tug on Finn’s heart is strong, but with the risks she’s taking for her next big story, he fears she might not live through it.

Thrown together by the heinous crime, Finn and Gabby can’t ignore the sparks or judgments flying between them. But will they be able to see past their preconceptions long enough to track down an elusive killer, or will they become his next mark?

Praised by New York Times best-selling author Dee Henderson as “a name to look for in romantic suspense,” Dani Pettrey has sold more than half a million copies of her novels to readers eagerly awaiting the next release. Dani combines the page-turning adrenaline of a thriller with the chemistry and happy-ever-after of a romance.

She researches murder and mayhem from her home in Maryland. For more information visit www.danipettrey.com 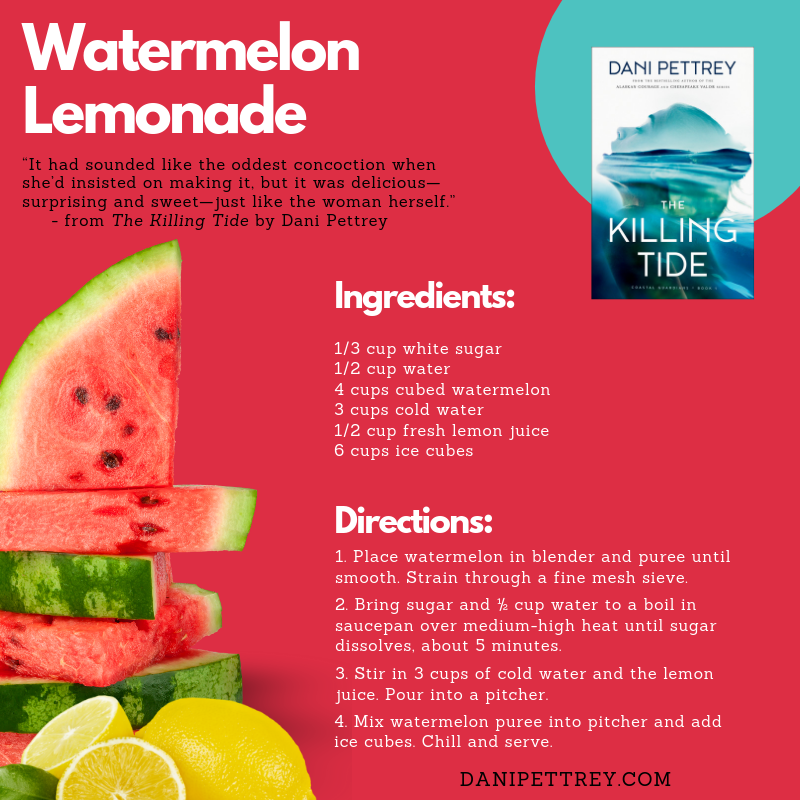 Pettrey kicks off her new Coastal Guardians series with an intense blend of suspense, love, and faith. The Killing Tide features romance that’s as thrilling as the action, and faithful characters integrated seamlessly into a complex web of crime.

The Killing Tide is the first book in my Coastal Guardian series. My husband was Navy, so why am I writing about the Coast Guard? Because I think their mission to keep our waters and our country safe should be highlighted more. Before I started writing The Killing Tide, I’ll admit I knew little about the Coast Guard. I had a friend in high school who joined the Guard right after graduation, but that’s about the depth of my experience with them. Then, my husband and I watched a movie called The Finest Hour.

If you haven’t seen it, I highly urge you to. It’s the true story of one of the most dangerous and daring rescue attempts in Coast Guard history. Boatswain’s Mate First Class Bernie Webber takes a small team to rescue the crew of the Pendleton T2 oil tanker, which split in half off the coast of Cape Cod during a brutal nor’easter in 1952. I won’t ruin the ending for you, but let’s just say it’s a wonderful testament to courage in adversity. After watching it, I knew I had to write a series about the Coast Guard. I began researching and came across the Coast Guard Investigative Service and my interest was highly peaked. After talking with Coast Guardsmen, both newly in the service and those long retired, I began to see the story weaving together like a movie in my mind. I hope you enjoy reading the CGIS Wilmington teams’ adventures, cases and…of course, romances.

Through the Fire Blogs, June 17

For Him and My Family, June 20

Spoken from the Heart, June 22

Because I said so — and other adventures in Parenting, June 29

Lights in a Dark World, June 29

With a Joyful Noise, June 30

Inside the Wong Mind, June 30

To celebrate her tour, Dani is giving away the grand prize package of a Kindle, $20 Amazon gift card and a signed copy of The Crushing Depths!!

Be sure to comment on the blog stops for nine extra entries into The Killing Tide giveaway! Click the link below to enter.