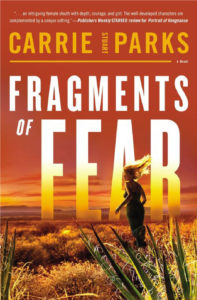 From award-winning author Carrie Stuart Parks comes a new novel with danger that reaches from a New Mexico Anasazi archaeological dig to micro- and nano-chip technology.

Evelyn Yvonne McTavish-Tavish to her friends-had her almost perfect world in Albuquerque, New Mexico, come to a crashing end with the suicide of her fiancé. As she struggles to put her life back together and make a living from her art, she’s given the news that her dog is about to be destroyed at the dog pound. Except she doesn’t own a dog. The shelter is adamant that the microchip embedded in the canine-with her name and address-makes it hers.

Tavish recognizes the dog as one owned by an archaeologist named Pat Caron because she did a commissioned drawing of the two of them months earlier. The simple solution is to return the dog to his owner, but she arrives only to discover Caron’s murdered body.

After meeting undercover FBI agent Sawyer Price the mystery deepens as more people start disappearing and Tavish becomes a target as well. Her only solution is to find the links between microchip technology, an Anasazi site in the desert, her fiancé’s death, a late-night radio show, and the dog. And the clock is ticking.

With her usual deft characterization, Carrie Stuart Parks has brought to life a cast of unique and believable people (and dog) in Fragments of Fear. This book moves fast, with as many twists and turns as any thriller, without losing sight of the individuals’ character development. The book begins with a rather ditzy, anxiety-ridden woman, burdened with shock and sorrows, but as soon as I started getting impatient with her, the story shifted, and I was hooked.

Each of the supporting characters is well-drawn and has a meaningful role in the story, just as every detail is important to the tightly-constructed plot. The author knows art and archaeology, and that expertise is obvious in the story. There’s also murder, theft, a disappearing corpse and chip technology in the mystery. The ending was surprising and satisfying.

I had to look up the breed of dog in the story, because it sounded so unusual. This is Marley, a Puli.  Not kidding.

It’s action-packed suspense, all the way through, but there’s a little romance and a light faith theme. If you like thrillers and suspense, you will enjoy this one! 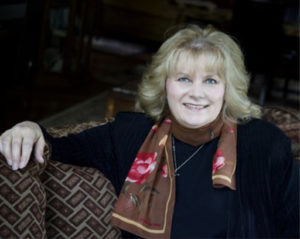 Carrie Stuart Parks is a Christy finalist as well as a Carol Award-winning author. She has won numerous awards for her fine art as well. An internationally known forensic artist, she travels with her husband, Rick, across the US and Canada teaching courses in forensic art to law-enforcement professionals. The author/illustrator of numerous books on drawing and painting, Carrie continues to create dramatic watercolors from her studio in the mountains of Idaho.

Since 1981, I’ve been a forensic artist—an amazing feat since I’m only . . .um. . . well, younger than that. In those years, I’ve seen some shifts and trends, but some things have never changed. Despite the overwhelming prevalence of computers in almost every other field, they have never been able to replace a trained forensic artist. Artists have an amazing toolbox of techniques we use to gather the information we need to help solve crime.

Want more? Check out the rest of my article at The Strand Magazine