The Show Must Go On

Going out to the Empire in 1926 wasn’t just a one-movie event. The films were part of an evening’s entertainment, which also included live music from the theater’s orchestra and Mighty Wurlitzer – the best theater organ in America. There was even more – various kinds of entertainment including a vaudeville troupe – musicians, dancers, comedians, actors, illusionists, and more.

These troupes traveled from one theater to another by train. They did it all the time. It should have been routine.  Then there was the Great Train Derailment. It didn’t just go off the tracks, like an ordinary train derailment. This one flung its passengers through time and space.

The famous New York talent agency, Tobler and Jones, had promised to send some of their best acts to accompany the Empire’s debut of Charlie Chaplin’s new film, The Gold Rush, but when they hadn’t arrived in time for rehearsal the previous day, I began to worry. An expensive long-distance telephone call assured me they were on their way. Then we heard about the Great Train Derailment. All over the country, according to the newsies, train passengers were showing up in the wrong places – and time periods. My performers could be anywhere… any time!

I was just starting to talk to the ushers and housekeepers -surely SOME of them could sing and dance – when a bedraggled, overexcited group of people burst through the door.

“We made it! We’re here!” They all talked over each other as I led them toward the dressing rooms.

I consulted my watch. “We don’t even have time for a rehearsal. Are you sure you’re ready?”

“Yes!” one of the girls shook out her fringe. “I learned some really groovy new moves on the way here.”

“I got some bodacious ideas for a new dance routine, too,” another said, “and I want to see if we can get one of those sparkly balls with bits of broken mirror to reflect the spotlights.

“Well, don’t expect me to dress up like that Elvis character.” The tallest man lifted his suitcase. “He looked like some kind of flaming youth, but shinier.”

“I thought he was the bee’s knees.” The youngest girl sighed. “I came over all faint just at the sight of him. I like the way his hair sort of swoops down. Much better than those people dressed all in black, with their hair standing straight up in spikes.”

“Yeah, yeah, you can tell me all about your adventures later.” I checked my watch again. “Just get ready fast, because the show must go on!

Have you read about the adventures? Check out each author’s website to find out which decades the vaudeville troupe visited and enter the giveaways!

The Show Must Go On!

My newest book, Murder at the Empire, is book 4 in the Ever After Mysteries from Celebrate Lit – a collection of mysteries inspired by fairy tales and set in the 1920’s. You can get some of them now and preorder the rest on Amazon. They are available for Kindle and in print. They’re in Kindle Unlimited, too! 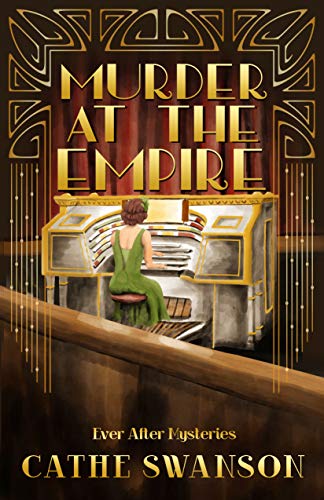 Murder at the Empire by Cathe Swanson

Gayle Wells is a killer organist, but does a killer have her in his sights?

They call him the Emperor.  John Starek fills his theater with fine artwork and treasures. He’s particularly pleased to have one of the country’s first female organists – and he thinks Gayle Wells is the bee’s knees.

Despite pressure from her social crusader mother, Gayle isn’t interested in changing the world. She just wants a car of her own – and a career playing the organ at the Empire movie palace would be especially ducky.

Then the Empire’s treasures start disappearing and employees start dying. Are a few pieces of art really enough motive for the string of murders? Will Gayle be next?

Murder at the Empire brings the old fairy tale, The Nightingale, into an elegant movie palace in the roaring 20’s – but the real excitement is all off-screen.